The Collinsville High School World Language Department is proud to announce that 23 seniors attained the 2019 Illinois State Seal of Biliteracy and received an added decoration on their diplomas.

The Illinois Seal of Biliteracy recognizes a student’s ability to effectively communicate in multiple languages. All students first had to prove their ability to communicate in English based on their SAT/ACT scores. After that, students in Spanish were tested on listening, reading, speaking and writing in their second language. Students in Latin were tested on reading and translating in Latin.

In addition, Annika Cosgrove achieved the Seal of Biliteracy in Latin.

According to World Language Department Chair Cara Kettler, “This is the first year that CHS also made the test available to Juniors who are excelling in their world language classes. While these students will have to wait for their results on their SAT/ACT English tests to officially be awarded the Seal of Biliteracy or the Commendation towards the Seal, their efforts are to be recognized.”

Juniors who qualified for the Seal based on their Spanish test scores are: Lena Juenger, Alondra Muñoz, and Monserrat Muñoz.

“We are beyond proud of these amazing kids. Receiving the Seal of Biliteracy or a Commendation towards the Seal is a HUGE accomplishment. These students will be able to use these test scores to test out of classes at the college level, and will make themselves even more marketable in the workforce. We couldn’t be prouder of them!” said Kettler. 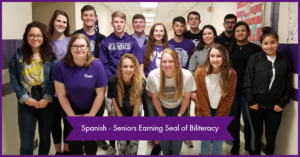